Many of the greatest works of fiction and fairy tales are set in places you could only imagine. But in fact, all these fantasy locations have a very real prototype.

I propose to get to know some of the places that once served as a source of inspiration for incredible stories. 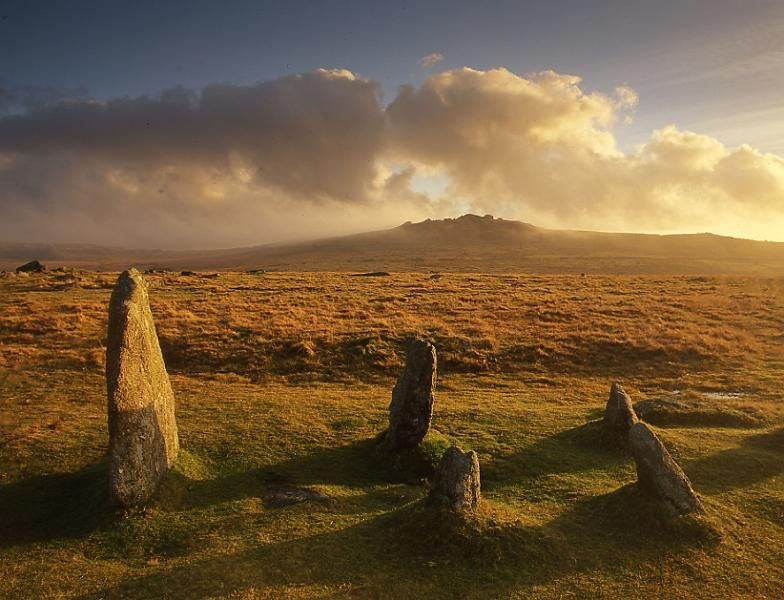 Granite cliffs, swirling fog and the mysterious swamps of Dartmoor became the setting for one of the most famous stories about Sherlock Holmes – “The Hound of the Baskervilles”. Sir Arthur Conan Doyle often walked the moorlands of Devonshire in 1901 before writing a story about hellhounds. The restless foggy landscape is saturated with local legends, which inspired Doyle's gloomy story.

During the creation of the elven kingdom of Rivendell, John R.R. Tolkien drew inspiration from the valley of the Swiss commune Lauterbrunnen (Lauterbrunnen) – a charming place among majestic mountains, forested hollows and noisy waterfalls. The author visited here in 1911, and the dramatic beauty of the valley immediately made an indelible impression on him – in a letter to his son, he admitted that it was this region that later served as the basis for his vision of Rivendell. The green valley has become part of the fantastic Middle-earth, which appears in the trilogy “The Hobbit” and “The Lord of the Rings”. 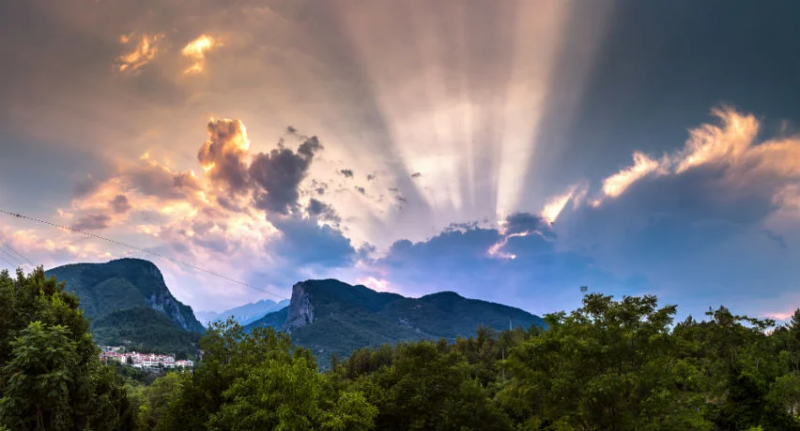 The highest mountain in Greece, Mount Olympus, was the mythical home of the mighty Zeus, king of the gods, and the other 11 Olympian gods and goddesses. In ancient Greek mythology, the summit of Mount Olympus, Mytikas, was known as the Pantheon, and it was here that, according to legend, capricious deities regularly gathered to debate the fate of mankind. People also believed that nine beautiful muses lived at the foot of the mountain – the daughters of Zeus.

The deciduous Sherwood Forest in Nottinghamshire is inextricably linked with one of the most famous folk tales in England – the legend of the outlaw Robin Hood, who stole from the rich and distributed money to the poor. There are many theories regarding the existence of Robin Hood and his possible historical prototype, but whether this hero existed or not, Sherwood Forest has its own history. It bore the title of royal hunting forest, which was trodden by many Norman kings, including John the Landless and Edward I. 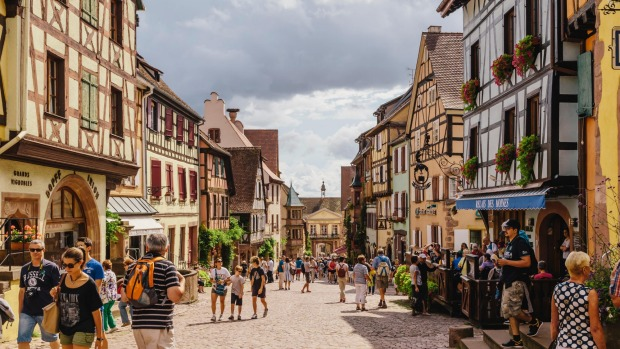 Walking through this city in the eastern French region of Alsace is almost like stepping into one of the Disney fairy tales. Few have been to Riquewihr, but it still feels painfully familiar. And no wonder, because the Disney animators were inspired by the medieval village during the filming of the cartoon “Beauty and the Beast”, based on the work of the French writer of the XVIII century Gabrielle-Suzanne Barbot de Villeneuve (Gabrielle-Suzanne Barbot de Villeneuve). Their creative vision of Belle's hometown was no doubt inspired by the colorful half-timbered houses, cobbled market with fountain and church spiers in Riquewire. 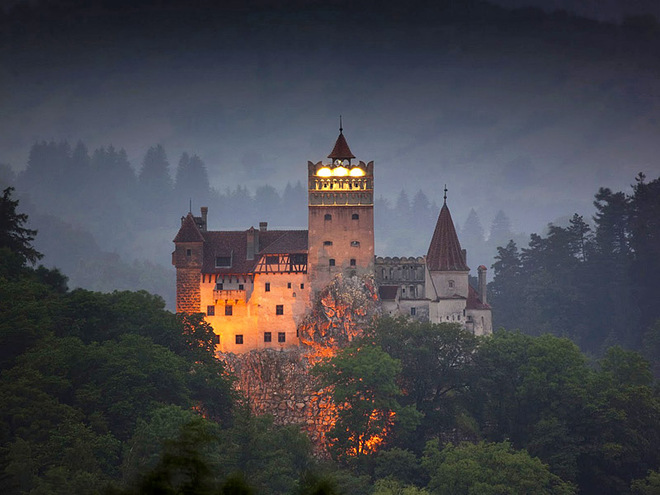 Perched atop a rocky abyss in the Southern Carpathians, this imposing 14th-century castle is often associated with the story of Count Dracula from the Irish writer Abraham “Bram” Stoker. Although the writer himself was not in Transylvania, covered with legends of vampires and werewolves, he drew inspiration for the creation of his gallant vampire from the story of the 15th century Romanian prince Vlad the Impaler (Vlad III Dracula). Bran Castle near Brasov has become associated with the romance of the Victorian era, mainly because of its location and exquisite architecture, which meets all the strict gothic norms.

The eerie ruins of Castle Frankenstein (Burg Frankenstein), allegedly serving as the prototype for the setting of Mary Shelley's novel in the 19th century, are located above the Rhine Valley within the Odenwald mountain range. After escaping to Europe, the young writer and her husband Percy Bysshe Shelley returned to England on a riverboat that made its way through Germany and past the castle. It is believed that it was then that the interested writer learned the story of an alchemist who performed experiments in search of the elixir of life and lived in an ominous fortress.

Although platform 9 ¾ does not actually exist (except perhaps an installation with a cart where Potter fans can take a photo), but the grandiose Victorian building of London King's Cross station plays far from the last in JK Rowling's story about the boy who survived.

It was here that Harry, Ron and Hermione went through the portal to Hogsmeade Station to board the Hogwarts Express to Hogwarts School of Witchcraft and Wizardry. And the look of the castle school itself was inspired by the towers of George Heriot's School in Edinburgh, easily accessible by direct train from King's Cross.

The raging sea, the cliffs rising above the waves and the grassy plains of the island of Unst leave an indelible impression. It is believed that the northernmost island in the UK was the prototype for Skeleton Island, the setting for Robert Louis Stevenson's classic adventure story Treasure Island. In his youth, the Scottish writer accompanied his father, an engineer who once built lighthouses and went to the island of Unst to inspect one of the local lighthouses.

It is believed that some of the locations that appear in the epic poem “Odyssey” by the ancient Greek poet Homer have real prototypes on the Mediterranean coast. One of the most famous is the enchanted island of Ogygia, where the nymph Calypso held Odysseus captive for years. Several places claim to be the real prototype, including the Croatian island of Mljet and Gozo in Malta. Locals claim that the cave of Calypso on Gozo (pictured), located inside the rock and overlooking the bay of Ramla, was the place where the stricken nymph imprisoned the Greek hero.

The fictional towns of West Egg and East Egg that appear in F. Scott Fitzgerald's The Great Gatsby are based on the real-life Kings Point and Sands Point on Long Island .

Jay Gatsby's fictional home was in King's Point, from where the hero looked longingly at the green light from the home of his beloved Daisy Buchanan. The majestic Land's End residence that inspired Daisy's home has been demolished, but there are still plenty of pretentiously opulent mansions in Sand's Point that look like they've stepped out of the pages of jazz and party novels.

The German city of Hameln (an obsolete spelling of Hameln) is inextricably linked with the fairy tales of the Brothers Grimm. In a Lower Saxon town dotted with log houses and winding alleyways, the tale of the Pied Piper takes place, a story inspired by medieval folklore. Hamelin is famous for the “rat trails” leading to various sights of the city, also dedicated to the piper. The city is one of many locations along the 603 km Fairy Trail, through hilltop villages, cobbled towns and dark forests, that inspired the Brothers Grimm to create dark and magical tales. 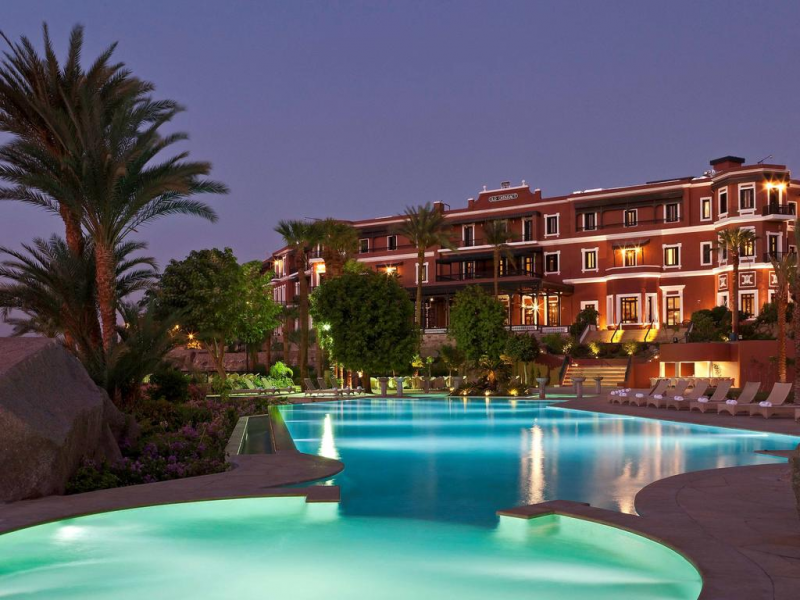 Perched high on the banks of the Nile in the Egyptian city of Aswan, the Old Cataract Hotel looks like it actually has a couple of mystical stories in its arsenal. Over the decades, many famous guests have visited the hotel, including Agatha Christie, whose passion for Egyptian culture significantly influenced her subsequent work. The writer lived in a hotel when she was collecting material for the detective story “Death on the Nile” and imagined Hercule Poirot solving mysteries here and in the temple of Abu Simbel next door. The majestic building of the 19th century was also used for filming the 1978 film of the same name based on the novel. 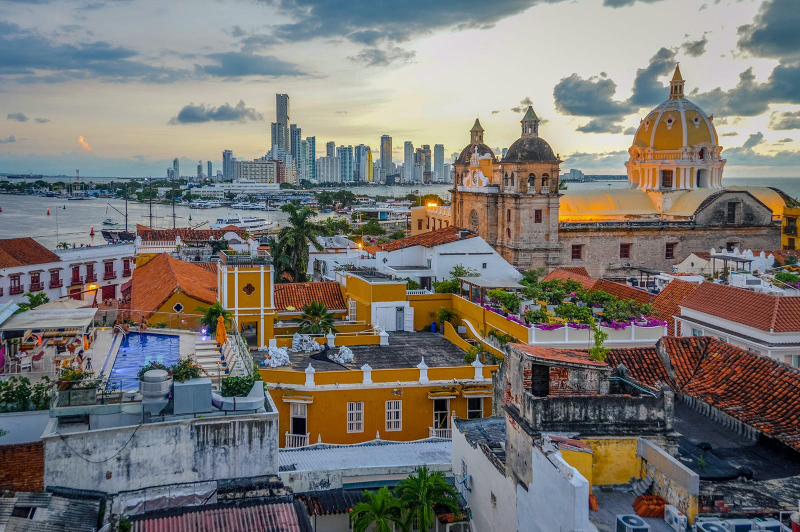 The novels of Gabriel García Márquez mostly take place in Colombia, most often in the Caribbean port city of Cartagena. During his time as a reporter, Marquez was sent to Santa Clara Convent in 1949 to report on a crypt discovered during excavations. Impressed by the trip, he wrote the book “On Love and Other Demons.”

Currently, the building of the former monastery is a hotel, which has a special hall in memory of the Pulitzer Prize-winning writer. And Marquez's house on the seashore appeared in the novel Love in the Time of Cholera.

Located high in the Bavarian Alps, Neuschwanstein Castle enchants with its fabulous white facade and blue pointed towers. It was he who inspired Walt Disney to create the Sleeping Beauty Castle in California Disneyland after the animator visited it while on vacation in southern Germany.

Built in 1868 by the eccentric King Ludwig II of Bavaria, Neuschwanstein was supposed to be grandiose recreation of Hohenschwangau Castle, where the prince spent his childhood. Now the castle is rightfully considered the most famous of the picturesque palaces in Germany.