A trip to the Tsmiakom Gorge for the flowering of rhododendrons

On Sunday, June 11, I went along the next Vladikavkaz route with the club “Your Height” to the flowering of rhododendrons in the Tsmiakom Gorge, in the area of ​​the Zaramagsky reservoir.

Our route ran from the village of Tsmi to the village of Toborza and further, to the ridge, from where a beautiful view of the surroundings opens – the Zaramag reservoir and the gorges of the same name, for example, Mamison, Narskaya hollow, as well as mountains – AdaiKhokh, Tepli and others.

The trip started at 8 am , which could not but rejoice me, because in life I used to wake up much later. There were 28 people plus 2 guides (Kazbek and Emma), and two gazelles.

If a place on the minibus is important for you, then I advise you to arrive 20 minutes earlier than the departure time, then the probability of sitting where you want , will be much higher. 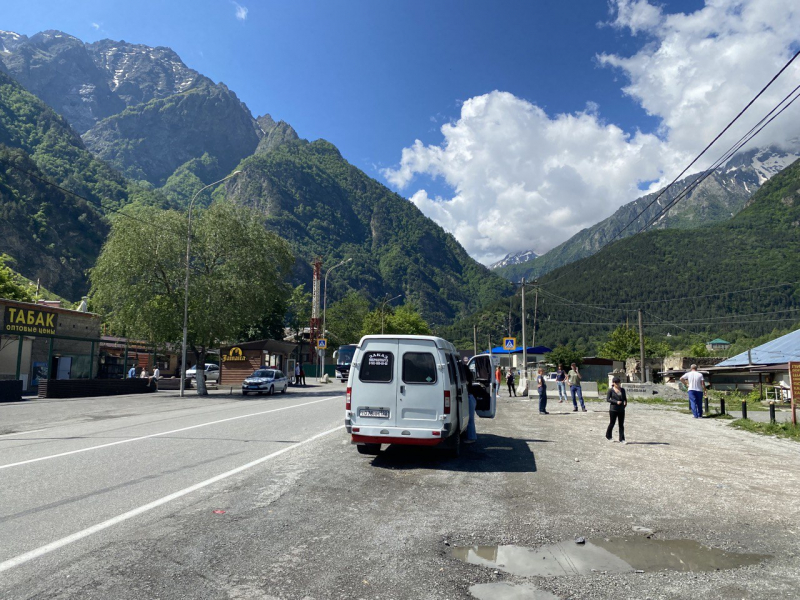 stop at the shops along the way

The road with one stop at the shops took about 2 hours and 20 minutes. The gazelles brought us to the shore of the Zamarak reservoir and dropped us off under the bridge,

we disembarked from the Gazelle

where we received a short briefing, got acquainted with the guides, and went.

beginning of our route

Literally from the first minutes of the hike, a picturesque landscape appeared to my eyes – bald green mountains , occasionally overgrown with trees and a noisy mountain river, refreshing our route on this hot day. 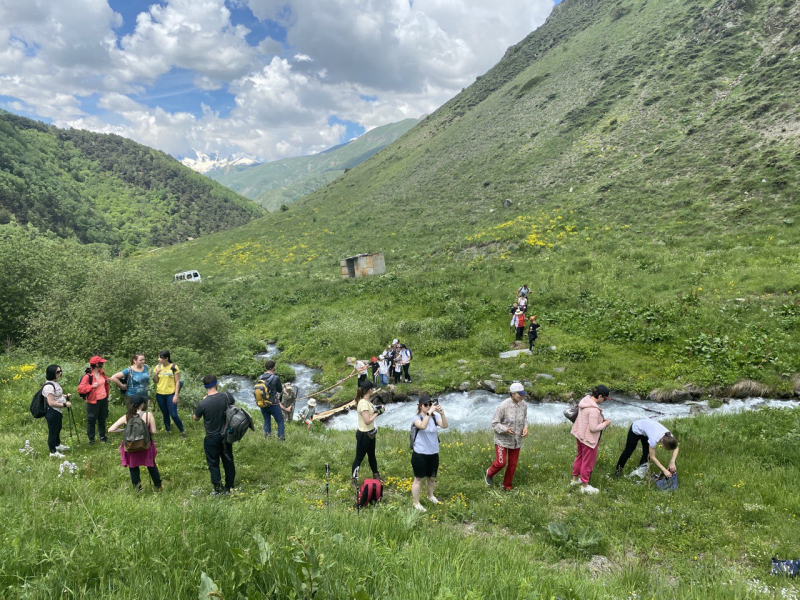 mountain river on our way 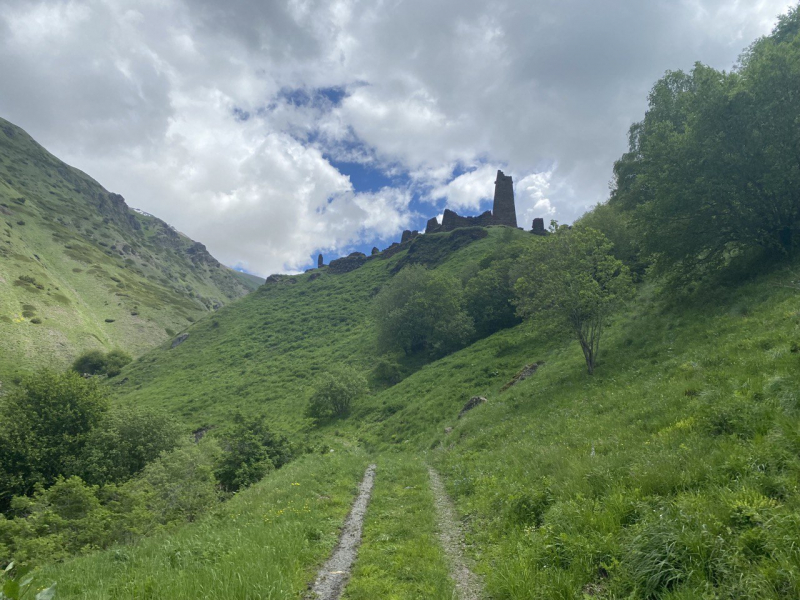 Along the way, we came across old abandoned towers, while part of the group went up to take morning pictures. However, there are a lot of nettles here. 🙂 Walk near the towers

Our tour group stretched for about half a kilometer. At the beginning of the group was Kazbek, and behind her was Emma. At first, I trailed behind, having met Emma and Madina, thinking that I would not rush and just take a measured walk in a pleasant company. But then it dawned on me that if I was trailing behind, then there would be people in all my photos, because our group is large, and it is unlikely that I will be able to capture landscapes without their participation, so I decided to take a place at the beginning of the group next to guide Kazbek. 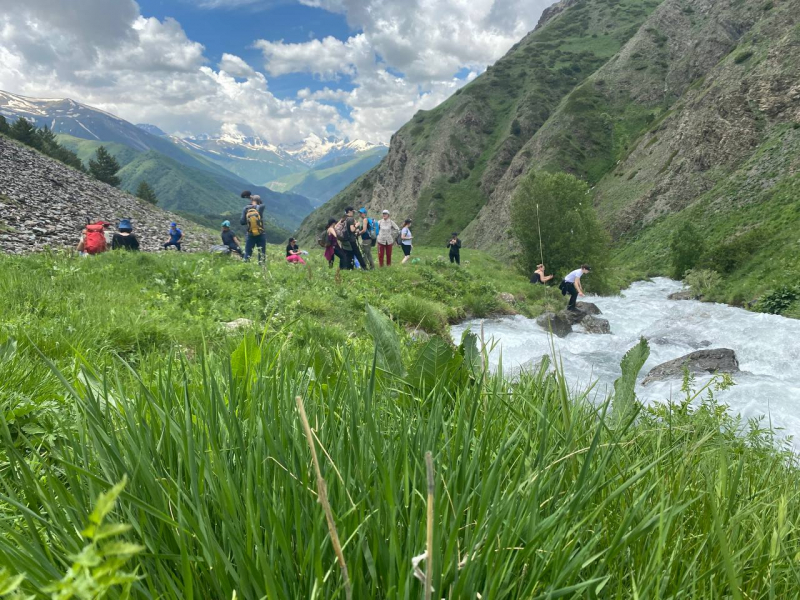 rest by the river 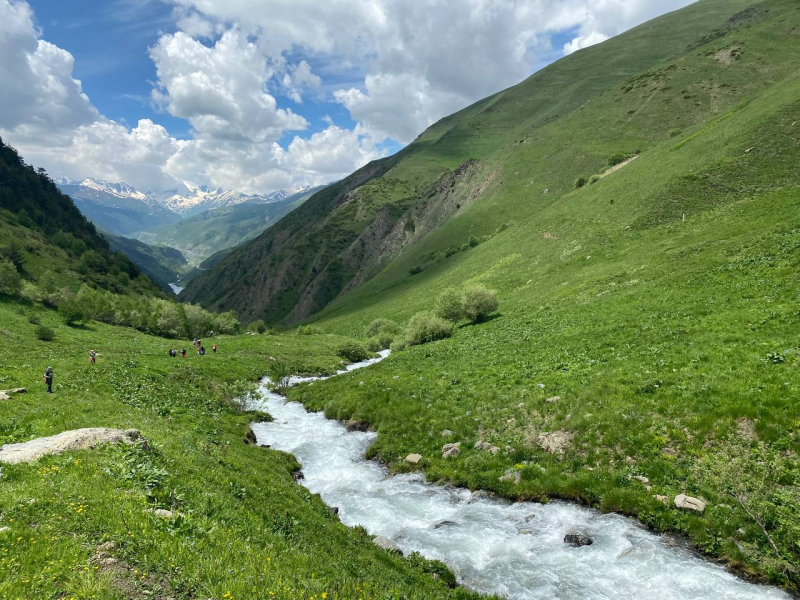 a clear mountain river stretches along the entire path 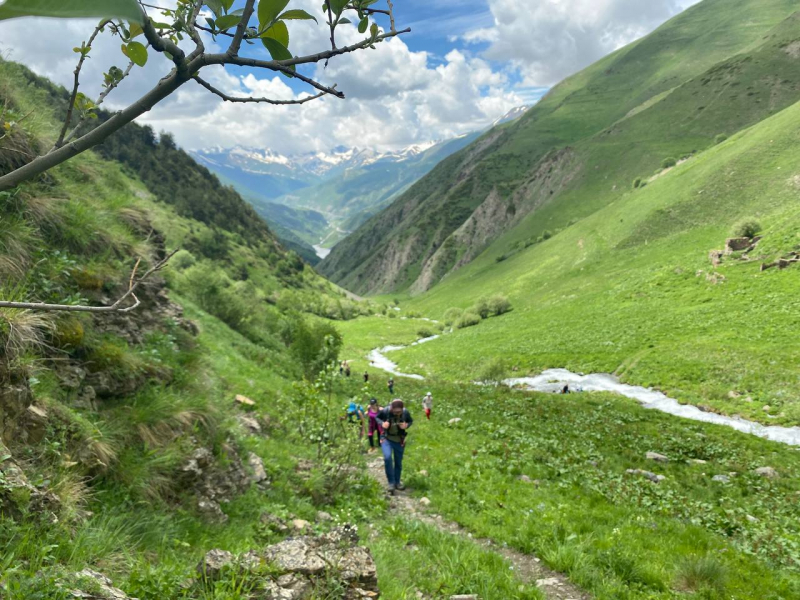 the group stretched for half a kilometer

As a result, the rest of the route I went first, which by the way was very convenient: firstly, I could take photos of natural landscapes without people, and secondly, I had more time to rest .

Be careful, in this area there is a cow parsnip, from contact with which you can get severe burns, especially in sunny weather. 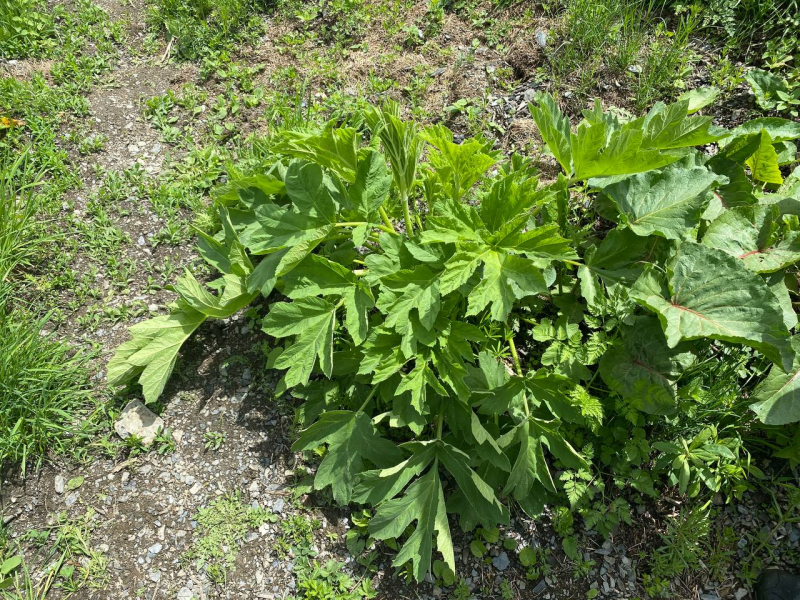 I met a dangerous hogweed along the way 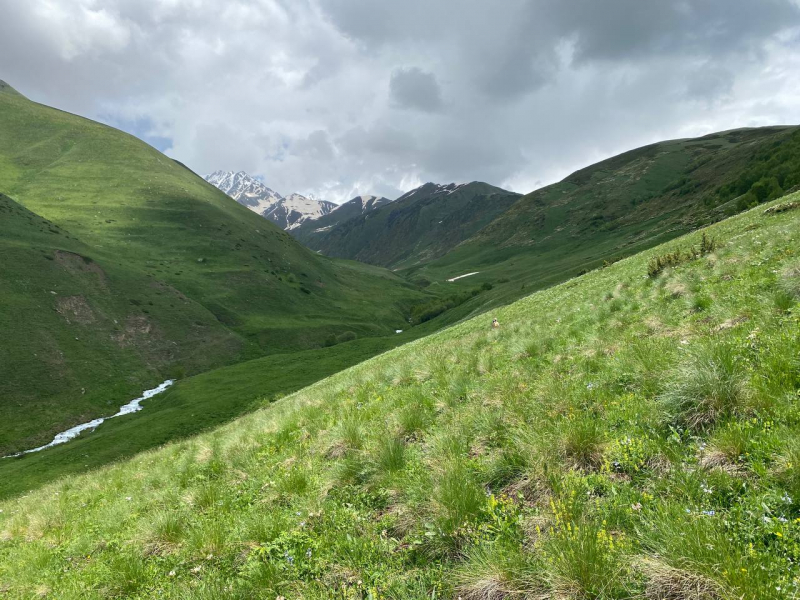 the first part of the journey there were such bare landscapes 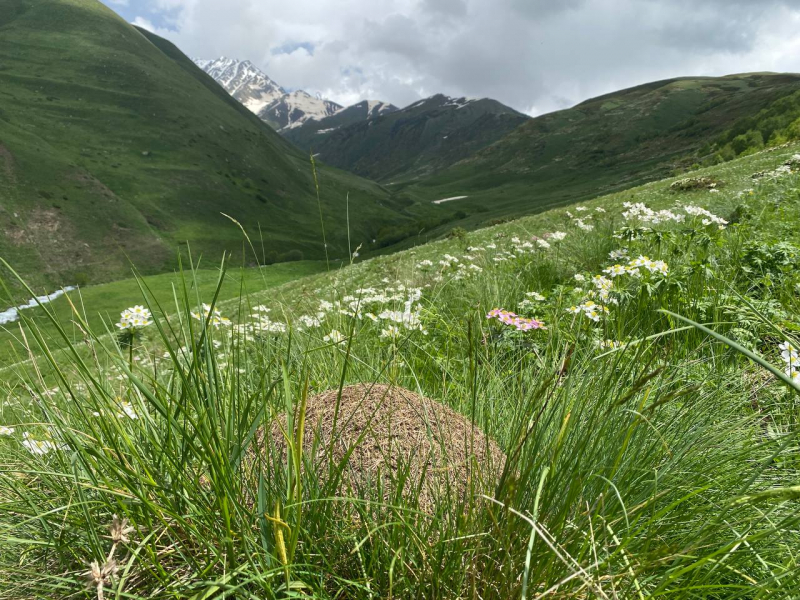 all slopes are strewn with different colors for flowering rhododendrons” /> 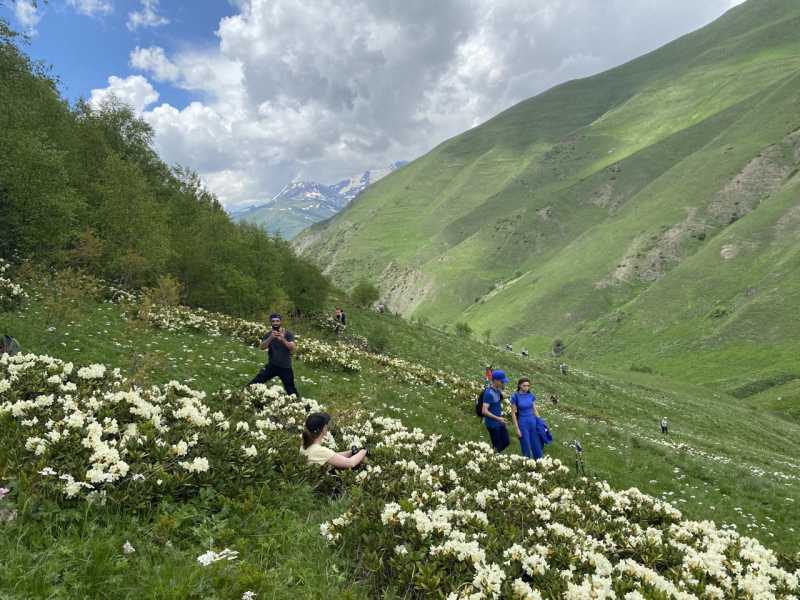 After taking pictures and having a rest, we continued our route further. Our path lay higher and higher – to the ridge.

going to the ridge

periodically rest on the slope 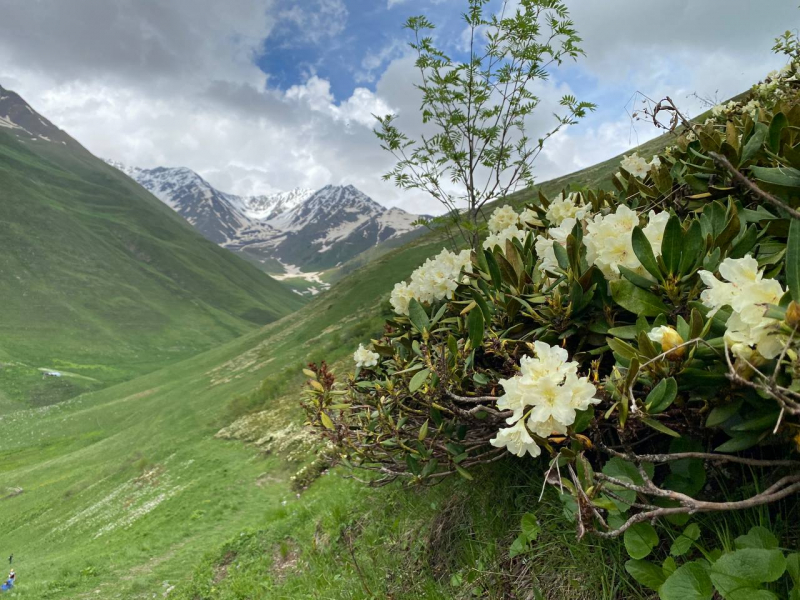 a lot of rhododendrons around 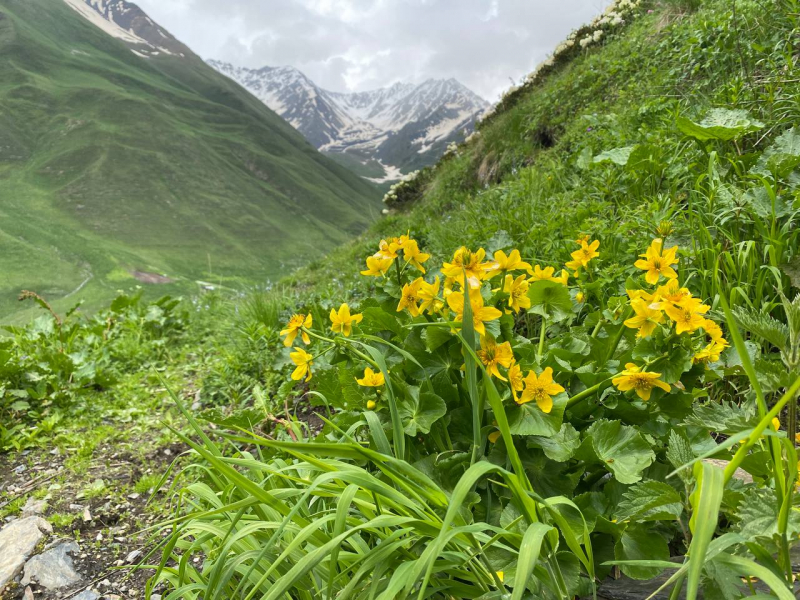 After about 1 hour, by 13:20, we were finally at the highest point of our route. From here you have a great view on both sides. On the one hand (on the right), there were high bald slopes of the mountain, on the other – green, forested mountains and gorges. And in the distance – the snow-capped peaks of four thousand meters. “/wp-content/uploads/poezdka-v-ushhele-cmiakom-na-cvetenie-rododendronov-a6fdc79.jpg” alt=”A trip to the Tsmiakom Gorge for rhododendron blossoms” />

top point of our route 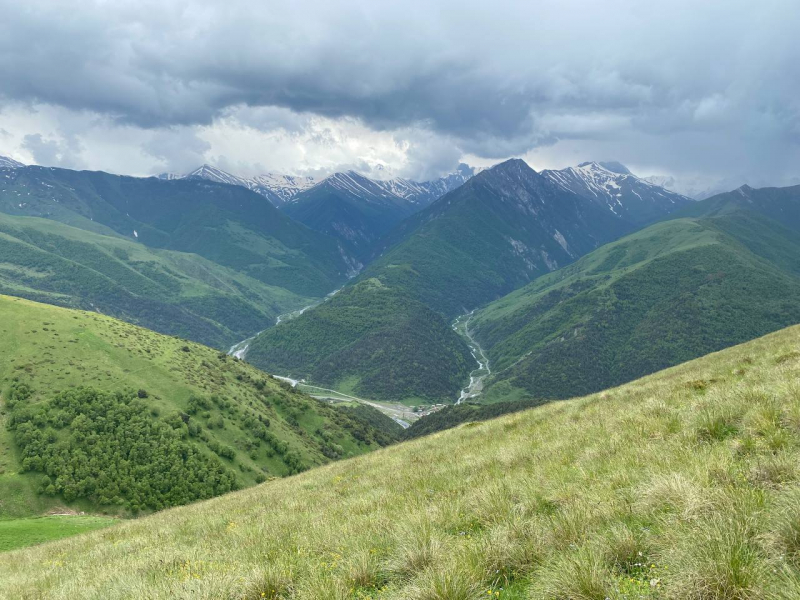 view from the top to another more wooded side

If it was quite hot downstairs, then, having risen here, it became cool from a pleasant breeze and occasional drizzle. For me, it's just perfect weather for a hike.

all sorts of flowers you won't find here

Here, at the very top, we had a big break for lunch, the three of us spent it, a little further from the main group, because they were located at the highest point where it was windy, and we moved a little further down, where there was a more comfortable atmosphere. We settled down in a place overlooking the Zaramag reservoir and had a great conversation. 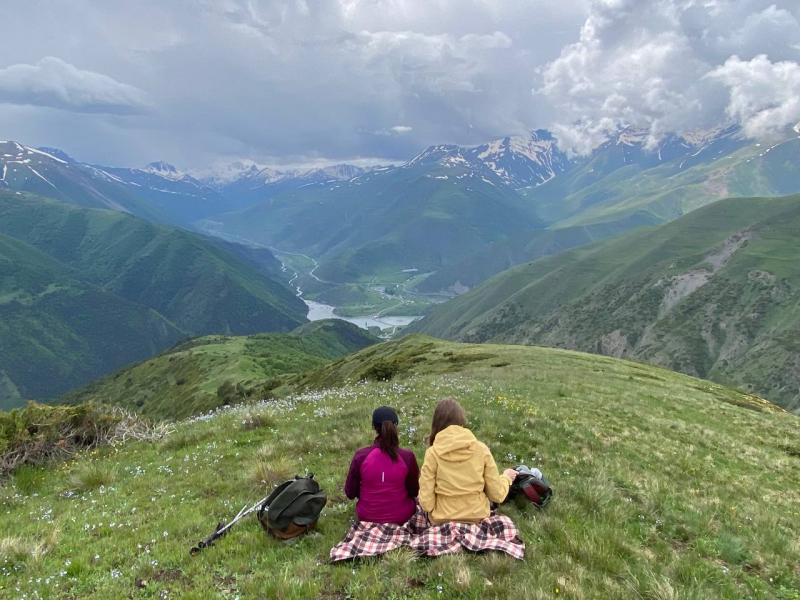 we have lunch at the top

I haven't met so many new nice people in one place (I'm talking about my trips in Vladikavkaz) in my life for a long time. 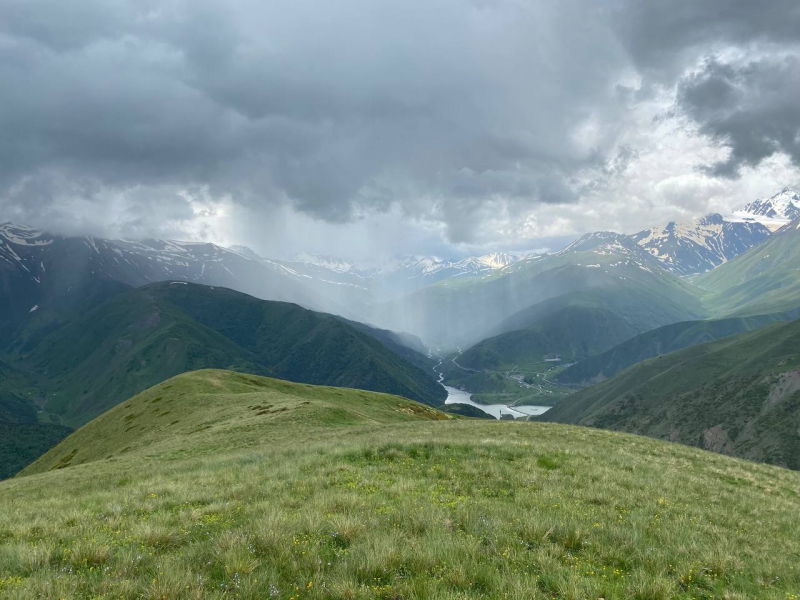 rain over the Zaramag reservoir

Well rested (by the way, this time I was not tired at all, unlike the previous trip to Kai-hoh), we went further along the top of the ridge. It was raining over the reservoir, but it never reached us.

The lower we went down, the more often bushes and trees began to meet. In this campaign, it was possible to conduct a lesson in biology – the diversity of vegetation living at different heights, my school teacher Galina Mikhailovna would envy.

Here you can also find such dwarf pines, junipers, very beautiful birches, hornbeam and oak. Dozens of different flowers and herbs must be added to this, including thyme.

periodically there are flower meadows view of the river and the Zaramag reservoir view of the Zaramag reservoir Our route lay to the Zaramagskoe reservoir, from where it started. Since this is the main landmark in this hike, and it can be seen from any high point, it is simply impossible to get lost here. 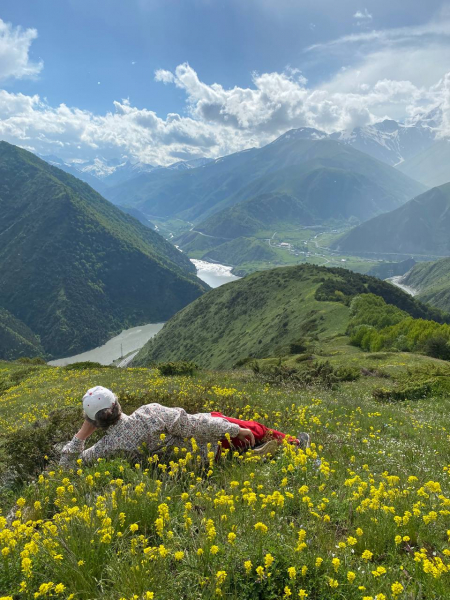 periodically took pictures among the flowers

On both sides of the ridge along which we walked there are gorges with rivers (on the left is the large Ardon River, on which the reservoir was created), the ridge itself is mostly not wooded and can be seen for kilometers ahead, and in front of the reservoir . In any case, you will always go to him. This is one of the main arguments for visiting this place on your own. 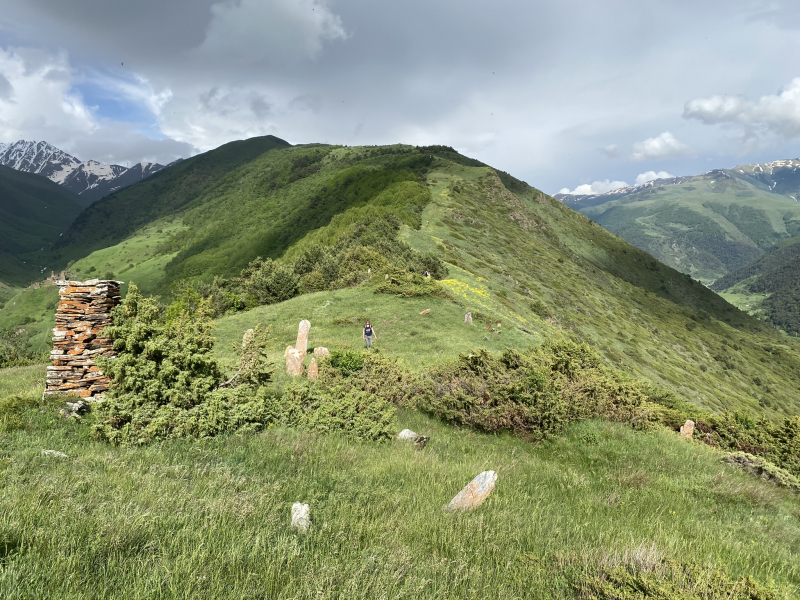 On the way we came across an ancient abandoned cemetery, with dozens of abandoned gravestones. Since all this looked very organic here, I honestly say right away and did not guess what it was until Kazbek explained. departures. 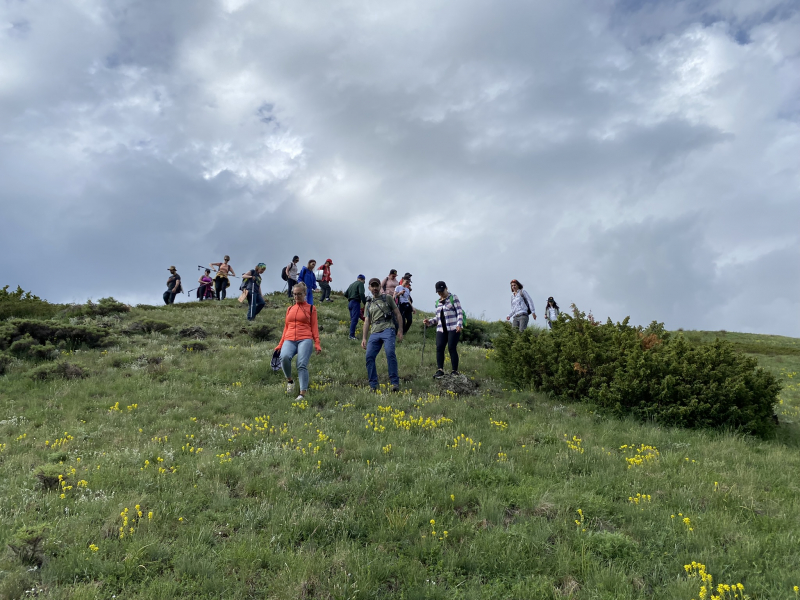 beginning of our descent

this beautiful pyramid mountain appeared at the end of the route 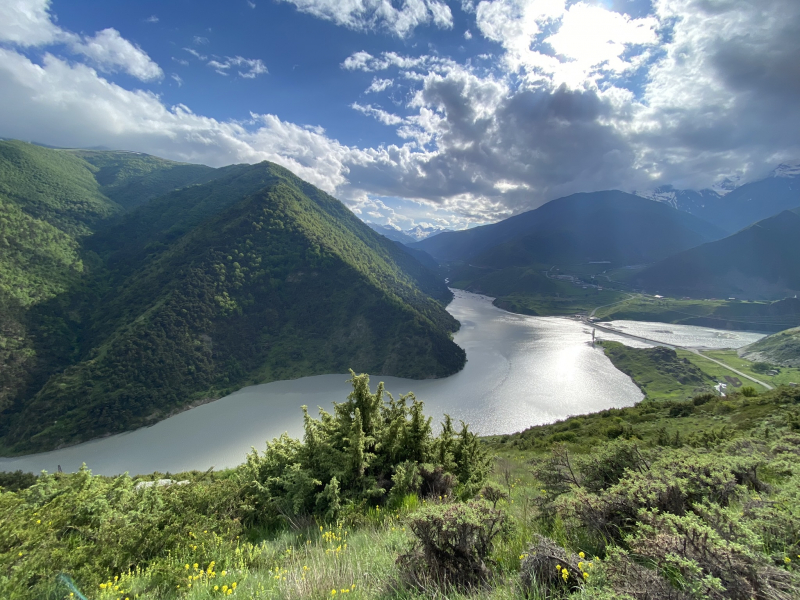 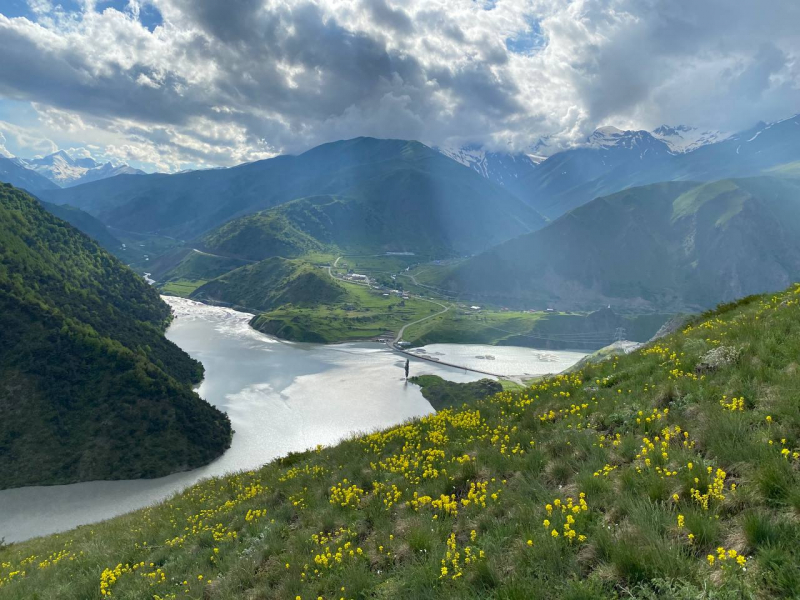 Sometimes you had to wade through thorns

The descent was a bit tricky, besides this section is sloping, it is almost entirely covered with small bushes and thorns, through which you literally had to wade. 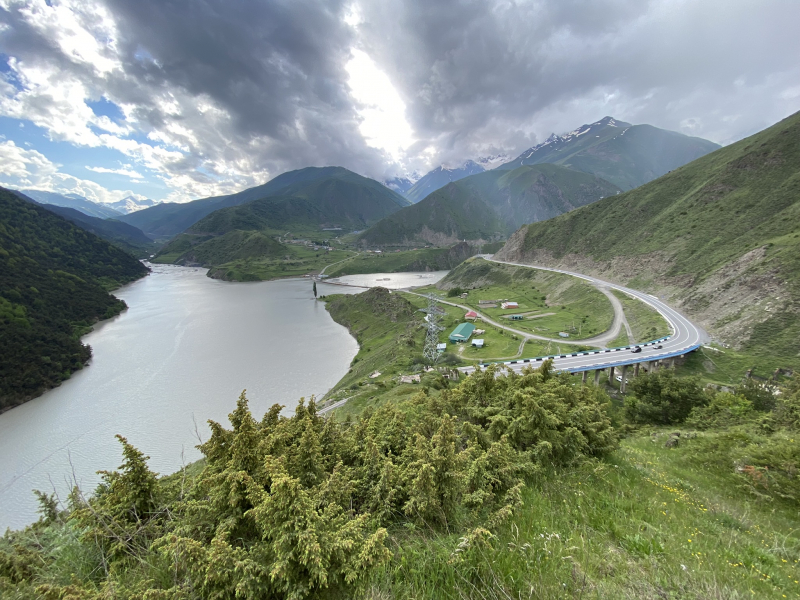 a bridge appeared and our gazelle under it 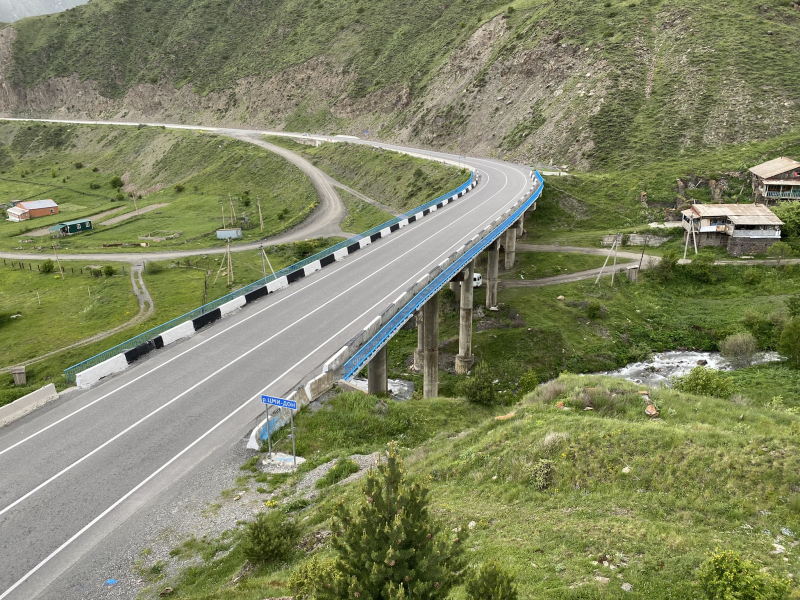 descended to the bridge and went to our gazelle

About 50 minutes later we went down to the bridge, under which our gazelles stood. It was a little sad that the trip had come to an end. I definitely recommend this scenic and not very difficult route! There are gorgeous views, many flowers and interesting plants. I am sure that it will be interesting at any time of the year!

A trip to the Tsmiakom Gorge for flowering rhododendrons

Chegem waterfalls – what to see and is it worth it to go here at all?