Civilization in the wilderness: outdoor recreation and impeccable comfort

The Yaroslavl seashore is a special place: here the gentle bank of the Volga with sandy beaches framed by pine groves is always lit by the sun, the water surface stretches to infinity, and the beauty of the landscapes of the Rybinsk Reservoir is breathtaking. And Yaroslavskoe Vzmorye is an all-season resort where everything is thought out to the smallest detail: entertainment for tourists, convenient infrastructure and exemplary service. There are so many recreational formats in this place that it is easy to get confused by the variety: in summer – beaches, SUP boards and yachts, in winter – a sauna and an outdoor thermal pool.1/1

The central object of the Yaroslavl Seashore is a huge hotel complex on an area of ​​30 hectares. His cottages with floor-to-ceiling panoramic windows and administrative buildings fit neatly into the natural landscape — the architecture does not disturb the overall harmony of the space. This is an ideal place for a family vacation – you can stay in a separate house, a hotel, and even in a cabin on the landing stage, from where you can enjoy panoramic views of the Volga.

The resort has a lot of possibilities. There is a kids club with mazes, workshops and a bunch of different activities: many families go to the hotel just because of it. For adults — an active recreation center with rental of winter and summer equipment, educational excursions and trips. In summer you can play tennis and golf, in winter you can go skiing and snowmobiling. Near the park hotel there is a pier where motor ships stop and a yacht club. ru/sized/f550x700/2j/yh/2jyh4qpxhuass440cs40gcsgw.jpg” media=”(max-width: 549px)”> 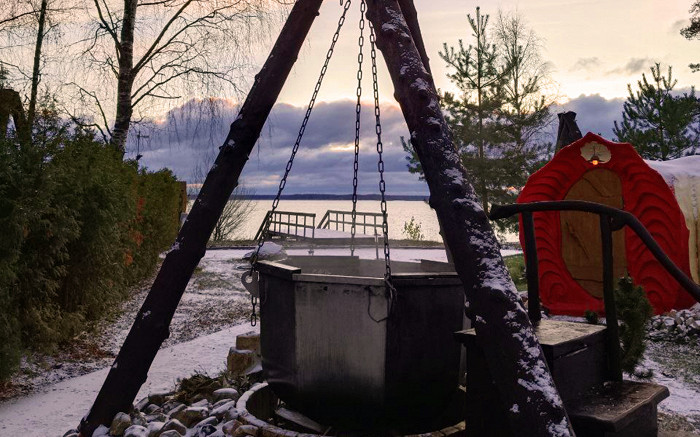 Coprino Bay Wellness Center with a sauna complex and an outdoor pool – a place for real relaxation of the body and soul.

After relaxing massages and spa treatments, you can take a steam bath in a herbal vat, then dive into the hot tub and emerge 10 years younger.

A dinner at a restaurant where all dishes on the menu are made from organic products is the perfect end to the day.

People come to the park hotel just for a day, without accommodation. A daily guest card costs 1000 RUB: it gives the right to stay on the territory, use the pool, spa area and gym of the wellness center, as well as the restaurants of the resort.1/1

A unique object of the Yaroslavl Seashore, created by the spouses Alexander and Olesya – the main man-made attraction of the resort. For 8 years, on their own, without state support, a married couple organized an ethnographic museum, in which houses from the 19th and early 20th centuries are collected from all over the Yaroslavl region, village life is carefully recreated, and a soul lives in literally every corner.

And it all started with a horse, which Alexander presented to Olesya for the birth of his daughter. The couple settled the animal in a dacha in Poshekhonye. He so cheerfully rushed about in the open that he received the nickname “Tygydymsky”. Gradually, Alexander had the idea to build unusual houses, engage in restoration and master carpentry. So in 2015, the project “Secrets of the Tygydym Horse” was born. He immediately began to win in competitions and in 2016 received the international award for the best brand of the Yaroslavl region.1/1

In 2018, I had to move from Poshekhonye due to problems with land rights. The administration of the “Yaroslavl Seaside” invited Alexander and Olesya to their place and did not fail – the ethnopark became the pearl of the resort. Today, the museum occupies 3.5 hectares – two horses roam freely, the rest of the territory is built. The family lives and runs their household there, so excursions are organized according to their needs. From May to October, you can visit all the buildings of the park, the rest of the time – only the museum house with a Russian stove. 1/1

Yaroslavl Seaside has grandiose plans. By 2027, they want to build Koprino Posad in the resort, which will become a place of attraction for tourists. The core of the project will be an indoor aquatic complex. They are going to build an extreme park nearby, as well as expand the yacht club, create a pilot academy at the local flying club and hold regular air shows for guests there. Tourists will be accommodated in three hotels, one of which will be put into operation in the summer season 2023. A cheese factory is being built at the Yaroslavl Coast, where they plan to organize a museum and offer gastronomic tours. A craft yard will appear on the territory of the ethnopark and on the pier. Master classes will be held there and souvenirs of craftsmen will be sold there.

On the way to the resort, as early as May 2023, it will be possible to make a stop at the Uglich Cheese-Dairy Factory (USMZ), where the Museum of Cheese Making will open. Visitors will watch the entire production process through a panoramic glass wall, where they will be able to get acquainted with the history of Russian cheese making. USMZ is a unique enterprise that produces famous and beloved varieties: “Russian”, “Poshekhonsky”, “Dutch”. The idea of ​​the plant management is to develop gastronomic tourism, to acquaint guests with the traditions of cheese making of our country's masters.