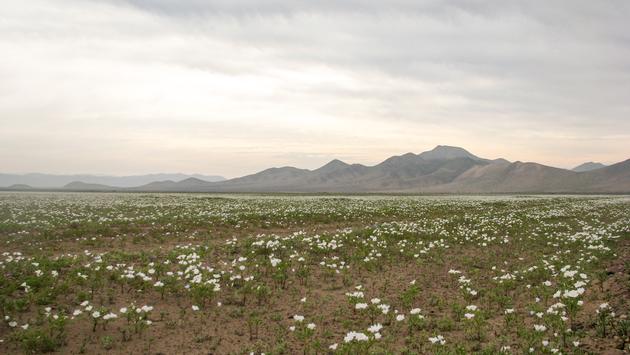 The Atacama Desert blooms in this season coloring an extended area of landscape. (photo courtesy of Chile Travel)

Chile’s Atacama Desert becomes a spectacle during the rainy season due to the different amount of flora species that are born gracing the large expanse of land of this magnificent site.

Visitors witness a unique phenomenon in a wide area from La Serena to Huasco. Among the different varieties of flowers that can be seen are red and yellow añañucas, huilli with white flowers, guanaco paws with fuchsia colors, and sighs in light blue and lilac tones.

This spectacle of nature, which is one of Chile’s great pride, attracts visitors from all over the world who admire the only desert in the world that has this floral characteristic, even though it’s the driest on the planet.

It should be noted that in 2022 this phenomenon has spread to more miles than in previous years, due to the large rainfall that was generated during the winter, and experts have predicted that this particular year the flowering will last much longer. The first buds were sighted at the beginning of September and could last until the end of October and into November.

In the regions of Atacama and Coquimbo, the authorities expect the arrival of thousands of visitors interested in witnessing this spectacle, and to do so, they have established, as a priority, an ecosystem and environmental care program.

Responsible tourism is a pillar of promotion in Chile as it is a source of pride for the inhabitants to have this natural heritage. In particular, the Atacama Desert wants to be declared a World Heritage Site to promote its care and conservation for future generations, as flowering is a unique phenomenon in the region.