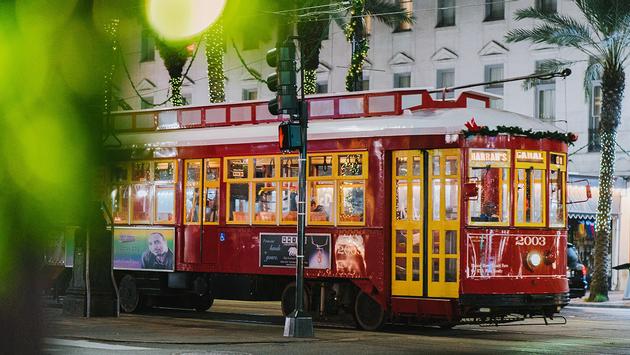 There isn’t an event or a holiday or an occasion that goes by without it being made better by having it in New Orleans.

If you thought celebrating Thanksgiving, Hanukah, Christmas, Kwanzaa, or New Year’s was special and fun, wait until you see how it’s done New Orleans style!

In a word? Incredible.

From elaborate displays within the city itself to individual neighborhoods, holiday light are prominent in New Orleans. The best place for families? Why, City Park of course. Between the park lights and hotel displays, the month-long festival is

highlighted by the Celebration in the Oaks, a dazzling display of lights guaranteed to bring out the kid in all of us.

There are literally hundreds of thousands of colorful lights and illuminated outdoor displays to showcase the holiday season in New Orleans. The imaginative decorations are strung across City Park’s centuries-old live oak trees and elsewhere throughout the park.

Gift-giving is part of the holidays and the shopping in New Orleans is phenomenal. Start in the French Quarter where you can combine a fantastic meal and imbibe in some local spirits while checking off you list. On Royal Street you will find some uniquely New Orleans-centric shops that range from kitschy and inexpensive to upscale. For the kids, be sure to stop in The Little Toy Shop.

New Orleans has a vibrant Creole heritage, and the celebration of the culture is a huge part of the holidays.

The Creoles celebrated the start of Christmas in the early 1800s, with a big family meal when they returned home from midnight mass. Today, the Reveillon tradition continues in the top restaurants with menus inspired by the Creole families who began the tradition.

Some of the most magnificent architecture in the country can be found in New Orleans homes, many of which have been remarkably well-preserved. So come and look during one of the most special times of the year.

Preservation Resource Center conducts self-guided holiday home tours, originating at Trinity Episcopal Church. As many as half a dozen Garden District homes may be included on tour.

It’s not a nightly event but the schedule is ambitious enough to see a concert just about every other night for the month leading up to Christmas Day.

You want a true New Orleans experience? This is it.

The Festival of the Bonfires is a true Cajun-influenced party. A bonfire is constructed on the river levee to serve as a traditional path for St. Nicholas to see during his Christmas journey. In the meantime, there is fantastic food, live entertainment, crafts, and things for the kids to do.

The bonfire is lit every night during the festival.

There is so much more, of course, so definitely check out additional resources and information about the holidays in New Orleans.