Foreigners are ready to eat it all the time: 5 of our dishes that are known and loved abroad

Residents of other countries perceive Russian cuisine ambiguously – for example, they consider our favorite okroshka, buckwheat and cabbage rolls to be dubious experiments and do not understand why they cook such strange food at all. But other traditional dishes were appreciated by foreigners and not only eat them with pleasure, but also advise others. Five domestic culinary inventions that are known and loved abroad are on the list of “Subtleties”.

The honorable first place in the rating of culinary sympathies of foreigners is occupied by pancakes: abroad they are considered a symbol of Russian cuisine and it is believed that in Russia pancakes are eaten every day – of course, with caviar. Those who have visited our country most often recommend their compatriots to try exactly blini. “It looks like crepes and is absolutely divine”, “Very tasty, especially with jam”, “Sweet lovers should try pancakes with apple filling”, “Pancakes are especially good for breakfast,” write Reddit users.

Abroad they are considered a symbol of Russian cuisine and It is believed that pancakes are eaten every day in Russia, of course, with caviar.

This Russian dish of French origin was invented by Count Stroganov's chef Andre Dupont. According to one version, finely chopped beef was easily divided into portions, and it was served on “open tables” in the count's house, where any decently dressed person could enter. According to another, soft meat in sour cream sauce was prepared for Stroganov himself – in old age it became difficult for him to chew. In modern recipes, champignons are added to the sauce, tomato paste is replaced with mustard, and mashed potatoes or pasta are served as a side dish. “Nice cuts of meat, mushrooms and thick sauce complement the noodles perfectly. I’ll probably try to cook it at home,” writes a tourist from Spain.

“Everyone advised me to try beetroot soup. And now I understand why the Russians are so strong.”

Experienced travelers certainly advise those who travel to Russia for the first time to try borscht, which is widely known abroad and has conquered half the world. And although Europeans and Americans do not often cook soups at home, they eat borscht with great pleasure: red vegetable soup seasoned with sour cream makes them gastronomically delighted. “Everyone advised me to try beetroot soup. And now I understand why the Russians are so strong. A healthy and very satisfying dish,” says the Austrian tourist.

For guests from other countries, the idea of ​​frying cottage cheese seems very strange, but having tried cheesecakes at least once, they cease to be surprised.

For guests from other countries, the idea of ​​frying cottage cheese seems very strange, but after trying syrniki at least once, they cease to be surprised. In 2015, this traditional dish was included in the top 25 best desserts in the world, and foreigners admit that a simple delicacy of cottage cheese and flour really deserves it. “I spent two weeks in Russia with my boyfriend, and his grandmother was constantly making syrniki. She even made her own cottage cheese. I'm hooked on them! We ate them with jam from berries, which they also collect themselves,” la_pluie, a Frenchwoman, shares her impressions.

What else to read on topic

“Overseas zucchini caviar” has been produced in Russia since the 1930s, but it gained real popularity under Khrushchev: he loved this vegetable appetizer so much that he ordered to feed the entire Union with it (although this is not the case here). only in the preferences of the Secretary General, but in the cheapness of the product in production). The tastes of the Soviet leader are also shared by foreigners: although this dish looks like it has nothing to do with caviar, it is low in calories and contains useful trace elements and vitamins.

“In a strange irony, it is called caviar, but it is more like baby food. You buy it in jars and keep it nearby to satisfy your nighttime hunger,” writes Marco from New York, who struggles with high-calorie late-night snacks. source srcset=”https://fs.tonkosti.ru/sized/f550x700/ao/sd/aosd9oxr73swww8cwg4s8ss4k.jpg” media=”(max-width: 549px)”> 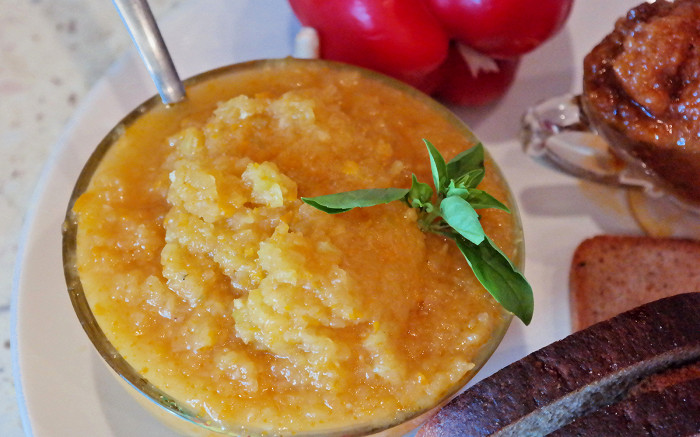