Off the Grid in South America: Brazil’s Pantanal 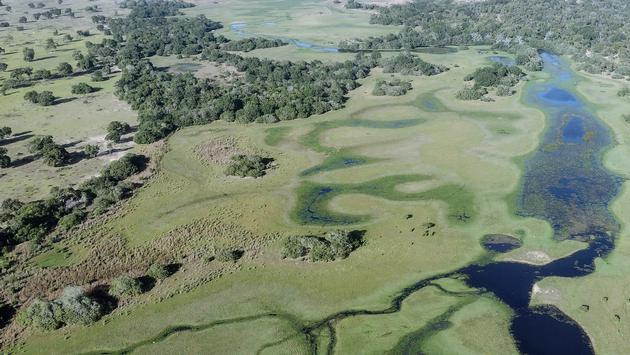 The invitation hit my inbox like a lightning bolt. The word “Pantanal” leaped off my screen, like a jaguar pouncing on its riverside prey. If you’re a collector of South American wildlife adventures, the Pantanal is on the same shortlist with the Galapagos, the Amazon and Patagonia, all emblematic of a continent’s most jaw-dropping natural spaces.

The chance to explore Pantanal was coupled with a trip to the ecotourism pioneering city of Bonito, both situated in the Brazilian state of Mato Grosso do Sul. EMBRATUR was hosting writers, producers, and photographers (all “influencers”) for an eight-night safari into one of the most remote regions of gigantic South America.

It offered the chance to see the continent’s very unofficial “big five” species: the anaconda, the jaguar, the giant anteater, giant river otters, and hippo-related tapir. Oh, along with piranha, caiman gators, the dorky Jabiru, giant hyacinth macaw, branch-leaping monkeys, giant river fish, and a host of other exotic critters.

The Pantanal ecosystem (a UNESCO World Heritage site since 2000) is said to embrace over 200 mammal species, 463 bird species, 269 fish and over 140 reptiles and amphibians. The Pantanal spans over 60,000 square miles (roughly the size of the U.S. state of Georgia). Some 2,000 plant species adorn the Pantanal eco-complex. The headwaters of the Cuiabá and the Paraguay Rivers crest and overflow four months of the year (December-March). This annual disturbance has given rise to some peculiar examples of natural adaptation.

You’re visiting the planet’s biggest wetland. I had a vague familiarity with the “flooded plain” ecosystem thanks to a Planet Earth segment about Africa’s Okavango Delta. Yet here was a chance to see and interact with earth’s true wetland mega-scape. The abundance and variety of plant and animal life give the typical African safari itinerary a run, all while staying in the western hemisphere. 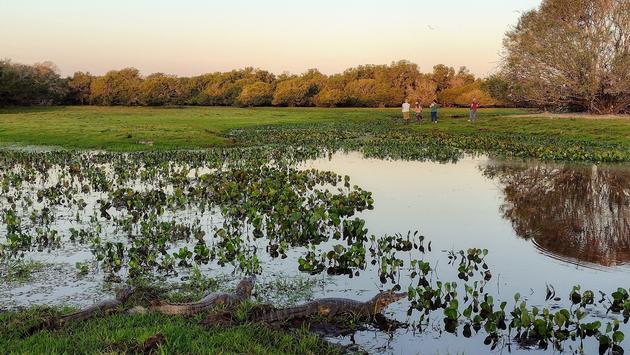 EMBRATUR president Silvio Nascimento says “Our country is very rich in biodiversity, filled with beautiful destinations like the Pantanal. And we want to further expand the awareness of this destination among North American tourists and welcome even more visitors interested in ecotourism and adventure attractions. The traveler who visits Pantanal experiences something really unique, a total immersion in nature, in the variety of fauna and flora, surrounded by stunning landscapes.”

Brazil’s Mato Grosso and its southern sister state (only founded in the late 1970s) experience an inundation of epic proportions, as this giant sloped plain drains seasonal rains from Brazil’s planalto. We know the Amazon basin drains east from the Andes to the Atlantic. It’s the Pantanal’s job to slowly move an inland sea of rain (falling from November-March) southward across a flat surface that alternates from standing water to dry sandy soil interspersed with tree “islands” that emerge during flood season. Waters rise from six to over 15 feet along the Parana River system, and nature must make do.

Elevation changes are slight (from 260-500 feet) and prime wildlife viewing is during dry months (June to October) when the landscape takes on a grassland savanna feel, with endless horizons, saturated blood-orange sunsets, and animal clusters around rivers and ponds. 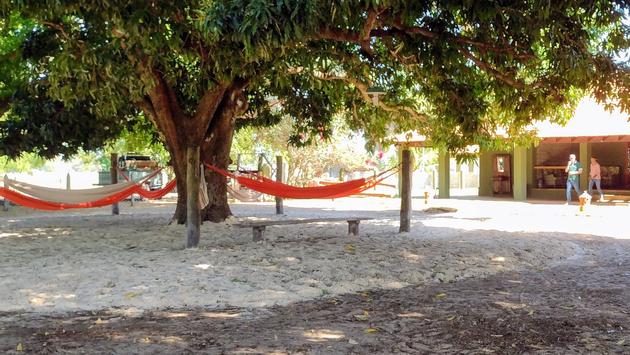 Our group focused on southwestern Pantanal, not far from the border with Bolivia and Paraguay. With the guiding hand of the Fazenda Baia das Pedras, the adventure was on. It’s a 37,000-acre cattle ranch that was opened in the 1940s. Its current owners are descendants of the Pantanal’s original migration wave (mostly European) in the late 1800s. A brand new safari lodge was reimagined at the site of the original homestead, reopening in 2021 after a total make-over.

This is not a region one goes driving about. We took a 55-minute single-engine air taxi from the state capital Campo Grande which was exhilarating. Arriving at the Fazenda’s grass runway marked by old tires, guests enter the property passing under four of the biggest mango trees I’ve ever seen. Soft cotton hammocks surround one tree and just beyond are the resort’s five suites, a communal dining room and an adjacent lounge area (all air-conditioned). 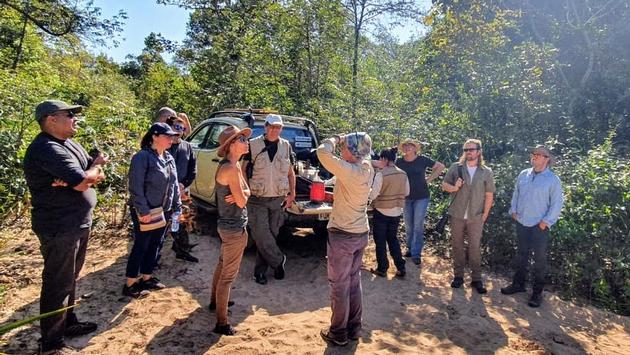 A double-door cooler of ice-cold, grab ‘n go Heinekens (meals, drinks and twice-daily tours are included) boded well. The Fazenda’s hearty welcome lunch was delicious and ample. All dishes are made from scratch with the typical Brazilian blend of rice, beans, manioc, stews, grilled meats, and fruit-inspired desserts.

The Fazenda is a respite for meals, naps, and storytelling, bookended by dawn and dusk tours led by staff interpreters of local Pantanal lore, engagement with an animal scientist team working to understand and protect the area’s tapir population, and local cattle hands turned excursion guides. The mix of included tours takes in walking, safari-ready Land Rovers, horseback, and small boats. Tours average three hours in length and are structured around prime wildlife viewing. Wi-Fi is spotty, at best.

Highlights include playful capybara (in family groups that frolic around waterholes), lounging and swimming caimans (the two states are said to have over 10 million of these gators, in a region with a mere five million inhabitants!), giant anteaters, armadillos, hefty tapir, and the dreaded piranha.

If before the trip I was told I’d be fishing for piranha—the toothful terror (and later eating them)—as gators tapped their snouts on my aluminum boat, I might have said “I’ll pass.” Instead, it was an exhilarating sundown expedition I’ll never forget. 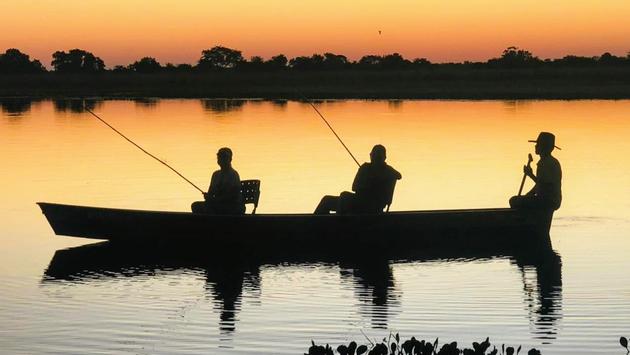 As a working cattle ranch, Das Pedras offers the full dude-ranch experience with cattle drives and large animal husbandry (optional). We are told cattle here are not responsible for the deforestation that plagues other parts of South America. The stock here eats native grasses and uses small islands across the range during summer flooding periods (December through March).

Each tour is fascinating. One at night under a dreamy Milky Way of galaxies and stars so low on the horizon they could have been streetlights. On horseback sloshing across ponds where caiman, capybara, and piranha dwell, barely noticing our incursion. Walking the savanna to see white egrets circle and envelop trees for a night’s roost. The Pantanal is truly unique. 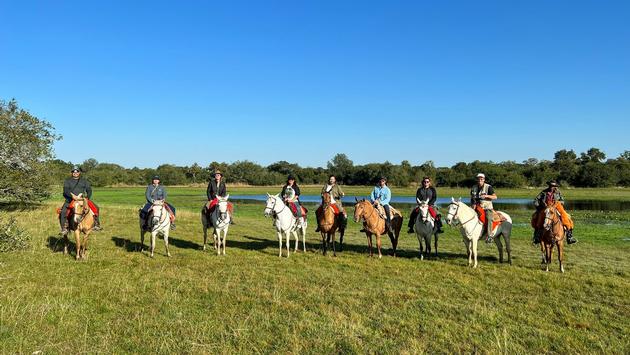 So far, the “Big Five” roaming animals eluded us, unless you count a museum-stuffed roadkill anaconda we saw in Campo Grande. We also missed by minutes seeing a tapir before it was released by scientists. Undeterred, our next stop was Bonito, another air taxi flight south to the Bodoquena Mountains and aquatic adventure par excellence. But more on that in part two.

Details for visiting the Pantanal: Air travel is easy but lengthy. It’s 9-11 hours from the U.S. to Sao Paulo, then a two-hour connection to Campo Grande (CGR). From Campo Grande (spend a full day seeing museums and its new aquarium), it’s then a daytime air taxi flight taking under one hour that lands just yards from the Fazenda Baia das Pedras. The Fazenda is only open April-October (dryer months). A four-night stay will leave you seeing lots and wanting more. They offer packages with meals, drinks, and twice-daily tours. There will be pleasant surprises along the way, including spontaneous caipirinha parties, dancing, an informal library about the region, nature talks and getting to know your hosts. This can be a life-altering trip for bored kids and teenagers, and the level of strenuousness is mild to modest. Yellow Fever inoculation is recommended for this region of Brazil

The 2019-20 wildfires inflicted on the Pantanal did not impact this “southern” Pantanal area. Also note that some may choose the “wetter” Pantanal experience, using gateways to the north like Cuiabá (CGB) or Corumbá (CMG).