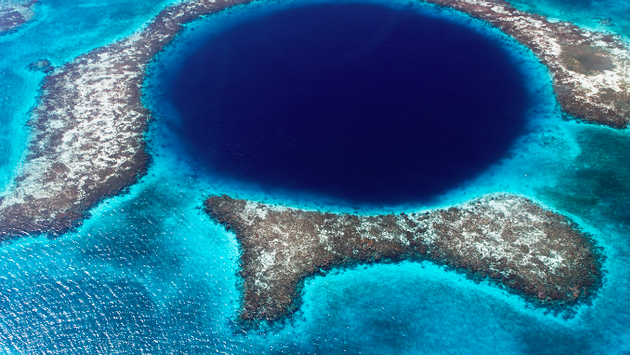 The magnificent Blue Hole is one of the many natural wonders that Belize offers its visitors. (Lomingen / iStock / Getty Images Plus).

Belize has a plethora of national parks, archeological sites, caves, and wildlife sanctuaries that house howler monkeys, bright green iguanas, more than 500 species of birds, and even jaguars.

The country is also home to the longest coral reef in the Western Hemisphere, as well as the magnificent Blue Hole, three of the Caribbean’s four coral atolls. Add to this an expanse of rainforests and the only Jaguar Reserve in the world, as well as waterfalls, rivers, caves, Mayan ruins, and, of course, white sand beaches.

For adrenaline enthusiasts, Belize offers zip-line rides through the lush rainforest, plus experiences with therapeutic activities and organic food dinner. “Some resorts offer tours for guests to see where the food they eat is produced,” says Mike Hernandez, Press and Communications Officer for the Belize Tourism Board. He adds that there is no language barrier in the country, and transport is easy and safe. He also comments that the Belizean dollar is equivalent to two US dollars, which is accepted throughout the country.

One of the great advantages of Belize is that, since it has a low population density, it easily complies with the new social distancing protocols, in addition to guests being served by a large number of the hotel staff. This small country always has room for those looking to have fun in the wide variety of attractions and activities it offers. “Most of the accommodations in Belize are boutique style so there is a low proportion of guests and as a result, can offer them more personalized care and attention,” says Hernandez. One of the most attractive things for visitors is the extensive series of caves in Belize that can be visited by tourists.

The most recommended are those found in the so-called Dark Night Cave and which are the following.

Here visitors have the opportunity to enjoy a zip line to admire the interior of the site containing archeological remains of Mayan culture, all with special permission from the archeology authorities of the Government of Belize.

In one of its chambers, visitors can find a valuable ceramic vessel and other tools used in pre-Columbian times. 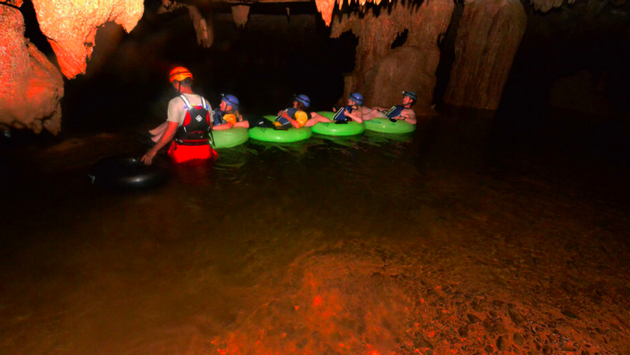 Cave tours are one of Belize’s most exciting experiences. (Photo via Belize Tourism Board).

This is the ideal place for those looking to discover the ancient secrets of Mayan civilization, as well as a series of attractive archeological finds, aboard a canoe. This is one of the longest river systems in Belize. This place is famous because it contains remains of Mayan civilization, such as bones of 28 humans, necklaces of animal bones, bone-carved human figures, ceramic vessels, and stone tools. Visitors can use cave tubing for a wet-and-wild trip down rivers and through the limestone caves. These tours are done in Barton Creek Cave and Crystal Cave, with the help of skilled tour guides.

This cave is open for cruise tourism and can be covered by cave tubing or kayak.

It is known as the Stone Tomb Cave. It was discovered in 1989 and was investigated for six years. It has been rated the number one sacred cave in the world and is approximately three miles long, although not all of it is open to the public. It has an entrance of turquoise blue water and can be walked because the water level reaches the waist of visitors.

This is one of the few caves that contain altars in the Mayan World. In addition, ceramic vessels have been found on this site, one of them with carved hieroglyphics, indicating that it belonged to an important character who visited the cave. This cave is a living museum because of the large number of remains of more than 150 ceramic vessels, especially that representing a monkey, which is one of only four found in the Mayan World. The site also contains the human remains of 14 people, including children and adults. Next to this place is the formation called Cathedral which contains many ceramic pieces, as well as other human remains. 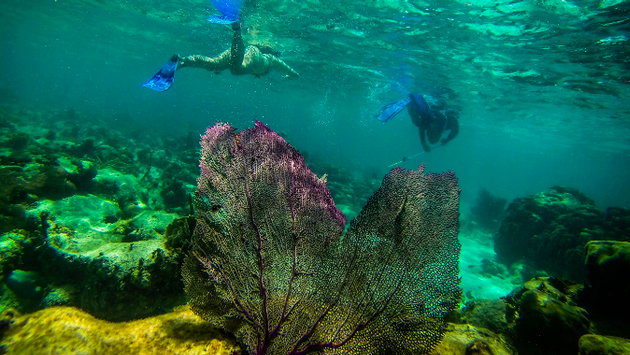 Snorkeling on the reefs of Belize is one of the most recommended activities for visitors. (Photo via GAdventures).

In short, Belize is a privileged place where activities fit the needs of each of its visitors, from those who like to tour archeological sites to those who seek recreation and sports activities such as bird watching, hiking, fishing, snorkeling, kayaking, horse riding, sailing, and much more, in the best of Caribbean nature.