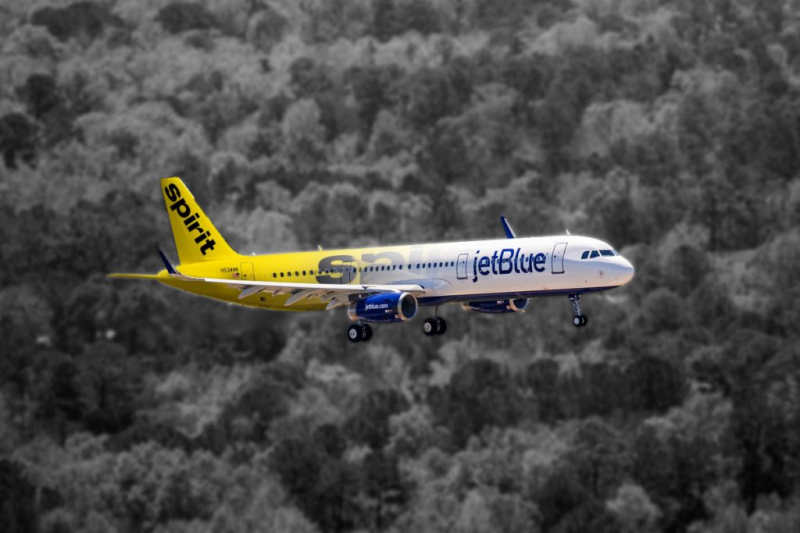 JetBlue has the takeover deal it wanted. But before getting control of its rival Spirit, Washington will need to give its green light. Here are the ways this could unfold.

Spirit Airlines might still escape JetBlue‘s clutches. Not from anything Frontier Airlines might do — Frontier is now out of the picture. Instead, the biggest obstacle now standing between JetBlue and its takeover of the Florida-based discounter are government lawyers. Antitrust lawyers.

To those lawyers, JetBlue will argue the following: Merging with Spirit will help consumers, not hurt them. Four giants currently dominate the domestic U.S. landscape (American Airlines, Delta Air Lines, Southwest Airlines, and United Airlines). A fifth airline with national scope will help exert downward pressure on fares, especially in big hub cities. In addition, JetBlue pledges to divest some of Spirit’s Boston, Fort Lauderdale, and New York assets to other low-cost carriers. The newly-enlarged JetBlue will become a more meaningful option for consumers in more places outside of the eastern seaboard, including large markets like Los Angeles and Las Vegas. In addition, JetBlue will argue, it’s a more consumer friendly airline than Spirit for reasons beyond price — more legroom, inflight television screens, free wi-fi, free drinks, free snacks. And for fliers that prioritize low fares above all else, JetBlue will continue to offer its Spirit-like, no-frills Blue Basic fares.

Opponents, of course, will argue the opposite: That consumers will suffer if a higher-cost carrier swallows a lower-cost carrier. That’s all the more true because the two compete so intensely in the busy Florida market. Well good news for the critics: They’re likely to find an attentive ear in Washington, D.C., where the Biden Administration last summer issued an executive order promoting more competition throughout the economy, mentioning airlines five times in the document. The Justice Department is already reviewing a separate JetBlue alliance with American covering northeastern markets Boston and New York that, by all accounts, is a lucrative arrangement for JetBlue that it won’t want to sacrifice.

Hard Decisions on the Horizon

But what if Washington says yes, but? In other words, what if the competition regulators say JetBlue can proceed with its Spirit takeover, but only if it abandons the American venture? Absent that, JetBlue could be asked to make other unappealing concessions, like surrendering additional airport assets, perhaps.

As its army of lawyers prepare to make the case, JetBlue will separately have to convince investors that spending close to $4 billion on Spirit makes strategic and financial sense. There’s no shortage of skeptics, most focused on the cost penalties associated with bringing Spirit’s labor compensation to JetBlue’s levels, and de-densifying Spirit’s planes to JetBlue’s seating configurations. Fair or not, there’s undoubtedly some awkwardness here: An airline with a record of relatively weak profit margins buying an airline with a record of higher profit margins. In 2019, for the record, JetBlue’s operating margin was 10 percent. Spirit’s was 14 percent. Since Spirit became a publicly-traded company in 2011, there hasn’t been a single year in which JetBlue produced better margins.

Things apparently have not changed much. Though Spirit has yet to report its second quarter results, JetBlue last week reported a dismal $69 million operating loss, never mind that all other U.S. airlines save Hawaiian Airlines (which has Japan-specific problems) reported June quarter profits. In fairness to JetBlue, it paid more for fuel than most of its peers last quarter (a whopping $4.24 per gallon). That said, its former merger adversary Frontier paid even more ($4.41 per gallon) and still made money.

Why JetBlue Wants to Buy Spirit

JetBlue knows it’s an underperformer. Hence the bold move to buy Spirit, which combined with other initiatives like the American alliance, will in theory create a larger and stronger airline better positioned to produce better margins. When first presenting its offer to investors in April, CEO Robin Hayes cited four key reasons for his interest in Spirit. First, he’s enticed by the carrier’s fleet and order book of Airbus narrowbodies, which meshes nicely with JetBlue’s own largely Airbus A320-family fleet. Spirit, according to data from Cirium’s Fleets Analyzer, currently has 180 planes (30 A321ceos, 56 A320neos, 63 A320ceos, and 31 A319ceos). It has 199 planes on order, 132 of them A320neos, 36 A321neos, and 31 A319neos. That’s a lot of new planes to accommodate the growth JetBlue hopes to achieve — growth that otherwise would be difficult given aircraft production constraints, not to mention the infrastructure limitations at its key northeastern airports.

The second reason Hayes gave for buying Spirit? People. Much like narrowbody aircraft, skilled workers are expected to be in short supply for years to come. Spirit provides, in other words, a larger labor pool for JetBlue. Hayes separately sees the tight pilot market leading to labor cost convergence across the industry, implying that Spirit’s pilots would probably wind up earning similar pay as JetBlue pilots before long, even absent a merger.

Thirdly, Spirit provides more airport access “to a lot of markets that are very important to JetBlue.” This includes airports like Los Angeles and Las Vegas in the western U.S., a region where JetBlue lacks a large footprint. Greater access to airport slots and terminal facilities, incidentally, was a major reason for its interest in buying Virgin America seven years ago — alas, it ended up like Frontier in that saga, losing out to a better offer (in this case from Alaska Airlines).

Fourth, Hayes likes the fact that both JetBlue and Spirit primarily fly leisure customers. All those similar-minded Spirit customers constitute a natural growth engine for JetBlue’s loyalty plan, as well as its travel products division. Don’t overlook that. The travel product division, led by JetBlue Vacations, was on course for a $100 million operating profit this year, Hayes said in April. Spirit brings the ability to scale all of that loyalty and leisure activity to more people and more markets. Important note: In the case of every major U.S. airline merger since 2005 (America West–US Airways, Delta-Northwest, Southwest-AirTran, United-Continental, American-US Airways, and Alaska-Virgin America), all resulted in significantly more lucrative credit card partnerships — emphasis on the word “lucrative.” JetBlue currently has co-branded card relationships with Barclays and MasterCard. Spirit works with Bank of America and MasterCard.

Spirit’s planes, Spirit’s people, Spirit’s airport footprint, Spirit’s customers: there’s indeed a trove of alluring prizes attached to this merger. But can it compensate for all the labor and density dis-synergies? This is not something JetBlue would openly say given the antitrust case it’s making, but the most significant merger benefit might very well be the mere elimination of a major rival. JetBlue and Spirit compete head-to-head on many price-sensitive Florida routes. Of course, removing an independent competitor from a market could attract newcomers, especially if average fares increase. But here again, the industry’s growth limitations (not enough pilots, not enough planes, not enough airport infrastructure) reduce the risk of attacks by new entrants. Frontier, incidentally, will remain the only true ultra-low-cost carrier on JetBlue’s radar. Allegiant Air and Sun Country Airlines have unique business models with limited relevance to JetBlue. Startups Breeze and Avelo will take many years to gain enough scale to be threatening.

In the meantime, JetBlue is intent on addressing its cost bloat regardless of what transpires with Spirit. There’s not much it can do about fuel prices in the near term. But it’s again accelerating the phaseout of its high-unit cost Embraer E190s. It’s optimizing crew scheduling and end-of-life A320 maintenance. It’s boosting asset productivity. It’s investing in automation. All told, these initiatives are expected to yield approximately $250 million in savings by 2024. That would follow a pre-pandemic program that removed $300 million from the cost structure. Pushing in the other direction, however, is a recurrent theme throughout JetBlue’s history: Operational challenges in the northeast and Florida forcing sub-optimal flight schedules. In fact, JetBlue would like to be growing this quarter. Instead, to ensure smooth operations, it will at best keep passenger capacity flat versus the third quarter of 2019. Growth, remember, puts downward pressure on unit costs. Not growing does the opposite.

JetBlue, to be sure, is expanding in some areas. Vancouver is a new route, for example. This fall, it will fly five daily frequencies to London, offering customers in Boston and New York another reason to join its loyalty program and get one of its credit cards. Operational performance, it claims, has improved as the summer progressed. Management continues to report strong bookings into the fall. It’s targeting $50 per passenger in ancillary revenues, an area where it was once a laggard. More A220s and A321neos are on the way. And the Northeast Alliance with American is yielding its intended benefits, aided by co-location of airport facilities at, for example, the revamped New York LaGuardia airport.

Also on the agenda: A lot of lawyering and a lot of waiting. Indeed, JetBlue says it might be mid-2024 before closing the Spirit deal. Let’s see what the Feds say.

This story was first published in the August 8 issue of Airline Weekly, a Skift brand.