What to see in Kazan over the weekend

Local residents consider Kazan to be the third capital of Russia and in many respects have good reason for this. In any case, the number of tourist wonders here is comparable to Moscow or St. Petersburg …

A trip to Kazan is a great option for spending a weekend. Of course, during the weekend tour it is unrealistic to visit even the main attractions of the metropolis. Nevertheless, in a short time you can feel the mood and eclecticism of the city, in which the motives of the great cultures of the West and East are mixed.

Dozens of travel agencies operate in the capital of Tatarstan, organizing excursions around Kazan. To travel around the city, you can use their services, or create a route yourself. Below we present the tourist locations of Kazan, two days off are enough to visit them. On Saturday it is appropriate to visit the first three places (they are within walking distance), and on Sunday – the last two.PoP

The first fortifications on the site of the Kazan Kremlin appeared in the 10th century, during the time of the Volga Bulgaria. The modern stone walls and towers were built in the second half of the 16th century. Today the complex covers an area of ​​about 15 hectares, representing a historical and religious center. About a dozen expositions are concentrated here, the most interesting of which are the museums of Islamic culture, natural history, the cannon yard, as well as the Hermitage Center.

Entrance to the territory of the Kremlin is free, the cost of tickets to various museums ranges from 100 to 500 rubles. The symbol of Tatarstan is the neighborhood in the Kazan Kremlin of the largest (and very beautiful) temples of different faiths: the Annunciation Cathedral and the Kul Sharif mosque. They are located very close, as if reflecting the multinational society of Tatarstan, whose inhabitants live in harmony. After a walk around the Kremlin, you can visit a museum or see the temples from the inside.

Kazan's main pedestrian street can be compared to Moscow's Arbat. The length of the boulevard is 2 km and each of its segments is interesting in some way. Dozens of historical buildings, cafes, hotels, fountains and monuments are concentrated here. Walking along the street, you can observe the famous buildings of Kazan: the Printing House in the form of an open book, the snow-white Epiphany Cathedral, the National Bank of Tatarstan and many others. 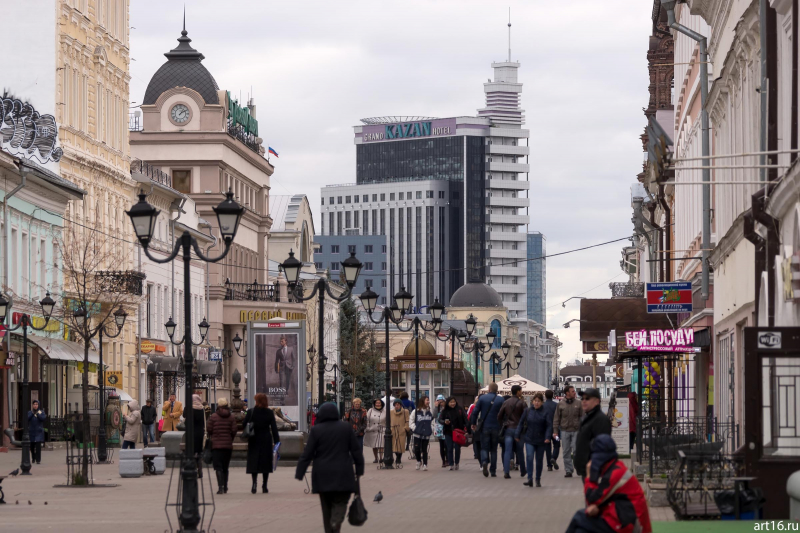 Numerous sculptures are of particular interest to tourists on Bauman Street. Almost all of them are associated with significant events that took place in Kazan, or have a local flavor. For example, here you can see a copy of the carriage of Catherine the Great, on which she once drove around the city, a sculpture of a cat (the symbol of Kazan) and one of the most touching monuments of the metropolis – “Trust” in the form of a boy saving a girl from a dog.

Bauman Street adjoins one of the best parks in the city, which opened in 2005. It was then that the millennium since the founding of Kazan was officially celebrated: from here the new park got its name. The main intersection of the complex symbolizes the meeting point of the West and the East, and the park gardens have a certain theme. For example, the Garden of Origin is permeated with the style of the Volga Bulgaria, the Eastern Garden is filled with objects of traditional Tatar life, and the Garden of Continuous Flowering is decorated with a composition of living plants that imitates the relief of Kazan.

The pearl of the Millennium Park is the Kazan fountain with a diameter of 36 m, the jets of which hit 17 m in height. The bottom of the fountain is littered with coins: visitors throw them into the pond with the wish that their life be as full a bowl as the Kazan fountain. You can walk in the park, constantly marveling at new discoveries, for hours. There are dozens of sculptures here, among which there are especially many statues of zilants – winged dragons, which, along with cats, are symbols of the city.

An authentic place that has preserved the aura of ancient Kazan of the XVIII-XIX centuries. Once rich merchants, professors of the local university, representatives of the Muslim clergy and heads of respected Tatar families lived here. Walking along the old streets, you can feel the atmosphere of a bygone era and touch the history of the Tatar people. Musicians play national music on the local streets, and from the minarets of mosques, the azan is periodically heard – a call to prayer.

The location has a developed tourist infrastructure. There are several interesting museums here (for example, the museum of oriental sweets chak-chak) and a lot of restaurants that treat customers to Tatar dishes. Numerous craftsmen's shops offer guests souvenirs and handmade clothes: skullcaps, ichigi and kalyapushi (women's mosaic hats). The oldest Kazan mosque called al-Marjani, three madrasas and other beautiful architectural structures are located in the Old Tatar settlement.

Translated into Russian, the name means “Native Village”. The complex is an ethnographic town located in the center of Kazan. The objects of Tugan Avylym reproduce buildings of various eras, ranging from Tatar tents to Russian log huts. You can see the houses not only from the outside, but also from the inside. The interiors and furniture correspond to the eras to which the buildings belong and are made by professional ethnographers.

There are several cafes and restaurants of national cuisines on the territory of the complex. Here you can try Russian pancakes, Tatar beshbarmak and, of course, the famous Kazan echpochmaks. You can safely go to Tugan Avylym with children. For them, there is an excellent entertainment program here, including a visit to the petting zoo, a fabulous playground and a rope park. Entrance to the territory of the complex is free, you only need to pay for visiting selected museums and attractions.