One of the last strange hotels world appeared recently in Berlin. Here, a real prison has been turned into a luxury hotel.

The spacious guest suite of the Wilmina Hotel in Charlottenburg was once prison cells.

Moreover, one of the cells was kept in its original form so that the guests would not forget about the previous inhabitants of the hotel.

Architects Adolf Bruckner and Eduard Furstenau designed the prison buildings in 1896, and some of them were used during World War II to accommodate fighters resistance. The women's prison was closed in 1985, but this year it opened in a new capacity for other guests after standing for decades “inaccessible and forgotten”.

Partly the walls of the prison were preserved, and with the help of modern materials managed to turn it into a super hotel.

The cell doors were left in their original form, and inside the entire space was covered with matte white paint, combining it with brickwork and warm cozy light.

To enter the hotel from the street, you need to cross the courtyard, and then enter the high-ceilinged lobby.

At the center of the building is a five-level atrium, where skylights fill the space with light, and balustrades recall the hotel's origins. 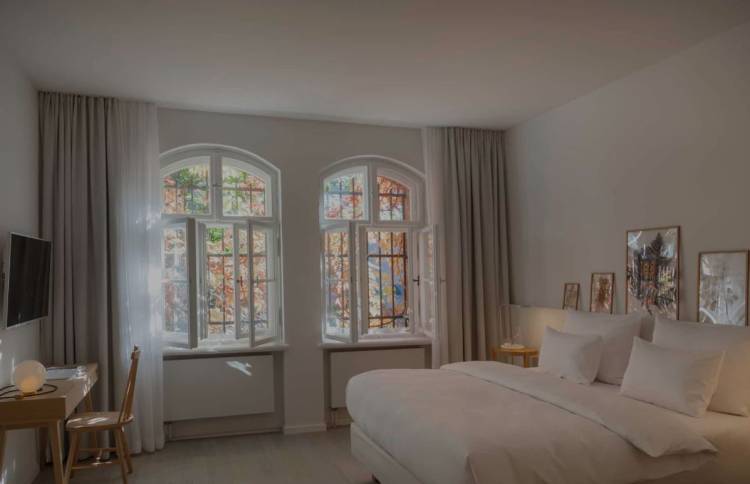 Since the cells were originally very small, the partitions between the cells had to be broken down to join adjacent rooms.

Now they range from 11 square meter singles to the massive 75 square meter loft that the old assembly hall has become. You can choose “cozy” or “classic”, “garden view” or a real penthouse.

Bars still adorn all windows, some of which have been “thinned out” to provide a beautiful view, and the rooms themselves are decorated in an elegant minimalist style.

The rooms on the fifth floor — panoramic windows “to the floor” and fine chain curtains.

Surrounded by trees and patios, Lovis Restaurant serves traditional cuisine in the author's performance of the chef Sofia Rudolf.

Rooms in August cost from 126 euros, and in September — from 150 euros

Located in the heart of Berlin, this hotel offers easy access to sights such as the Berlin Wall, the Reichstag building, Museum Island and the Brandenburg Gate.

Wilmina — not the only prison hotel in the world.

Malmaison in Oxford was once the A Wing District Jail at Oxford Castle.

A Four Seasons Sultanahmet in Turkey was a prison until 1918.